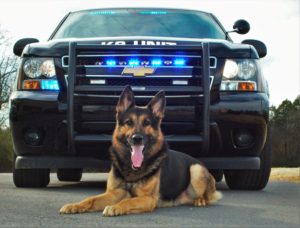 The Hollywood Police Department K-9 unit was established in 2011, the initial cost of starting this unit was paid for out of seized drug money. Chief Hepler traveled to Texas to go to K-9 handler school and, after passing the course, he returned with K9 Abi. K9 Abi played a huge role in cleaning up the drugs in Hollywood and also made a big impact on all agencies in Jackson county. K9 Abi worked about 4 years before beginning to develop hip dysplasia and having to be retired.

Chief Hepler applied for a grant from K9s4Cops.org and was accepted into the program. He went to AMK9 Academy to train with his new partner K9 Fox.

K9 Fox is a war veteran K-9 who spent 3 years protecting military and civilian workers. He was decommissioned once the war came to a close and he was brought back to the United States by AMK9 Academy. K9 Fox was screened and deemed healthy when he returned and he was not ready to retire. He was recommissioned as a Police K-9 and was made available to Chief Hepler at zero cost to the department.

It has been a tremendous honor to work beside K9 Fox every day; he is an outstanding K-9 and partner; even more than that, he is a hero to the freedoms of the American people.

K9 Fox has assisted in many drug arrests, tracking fleeing subjects and seizures of drug funds.